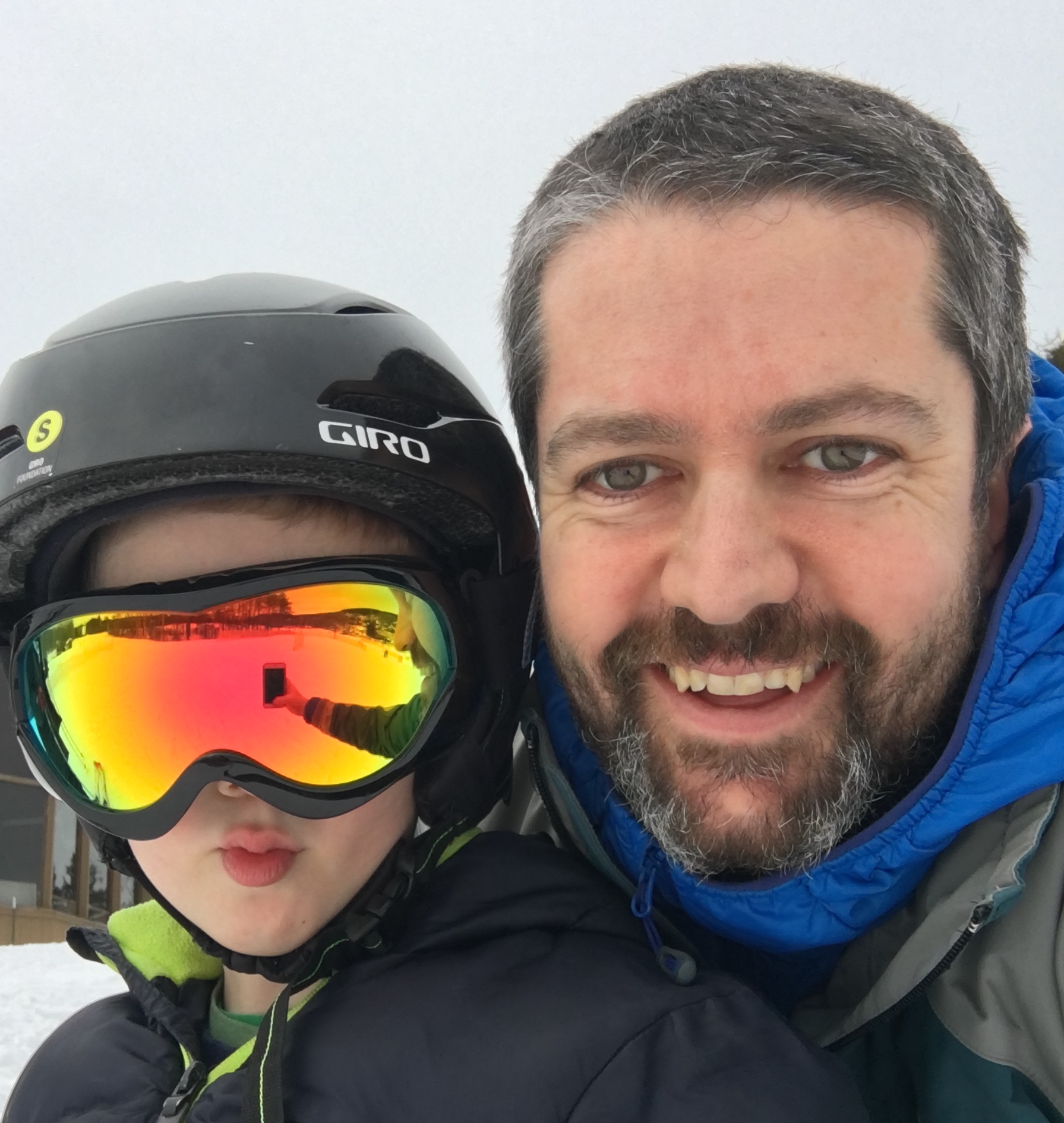 I use field, lab, and quantitative approaches to study the ecology, evolution, physiology, and behavior of wild birds.

My research is motivated by a fascination with biological variation; at every scale, animals vary enormously in how they interact with and respond to their environment. Even though responding to challenges appropriately is critical, individuals in a population often vary enormously in their responses and even the same individual often varies when measured repeatedly at different times or in different contexts. I am interested in what causes these differences and what the consequences of variation are for individuals and populations. How can some individuals successfully cope with capricious environments that are fatal to others? Why do some individuals successfully produce many offspring while others fail to attract a mate?

My organism-centered approach emphasizes the importance of connections across different levels of biological organization from cells to populations and the scope of my research interests is necessarily broad. However, much of my work is focused around two of the major challenges that animals face in natural populations: mating successfully and coping with environmental challenges. These processes fascinate me because they often push individuals to their physiological limits, revealing between-individual differences that may not be apparent during normal daily activity or under more benign conditions. Successfully navigating these challenges demands a highly coordinated suite of traits that bridge physiology and behavior. Read about a few of my ongoing research projects below. 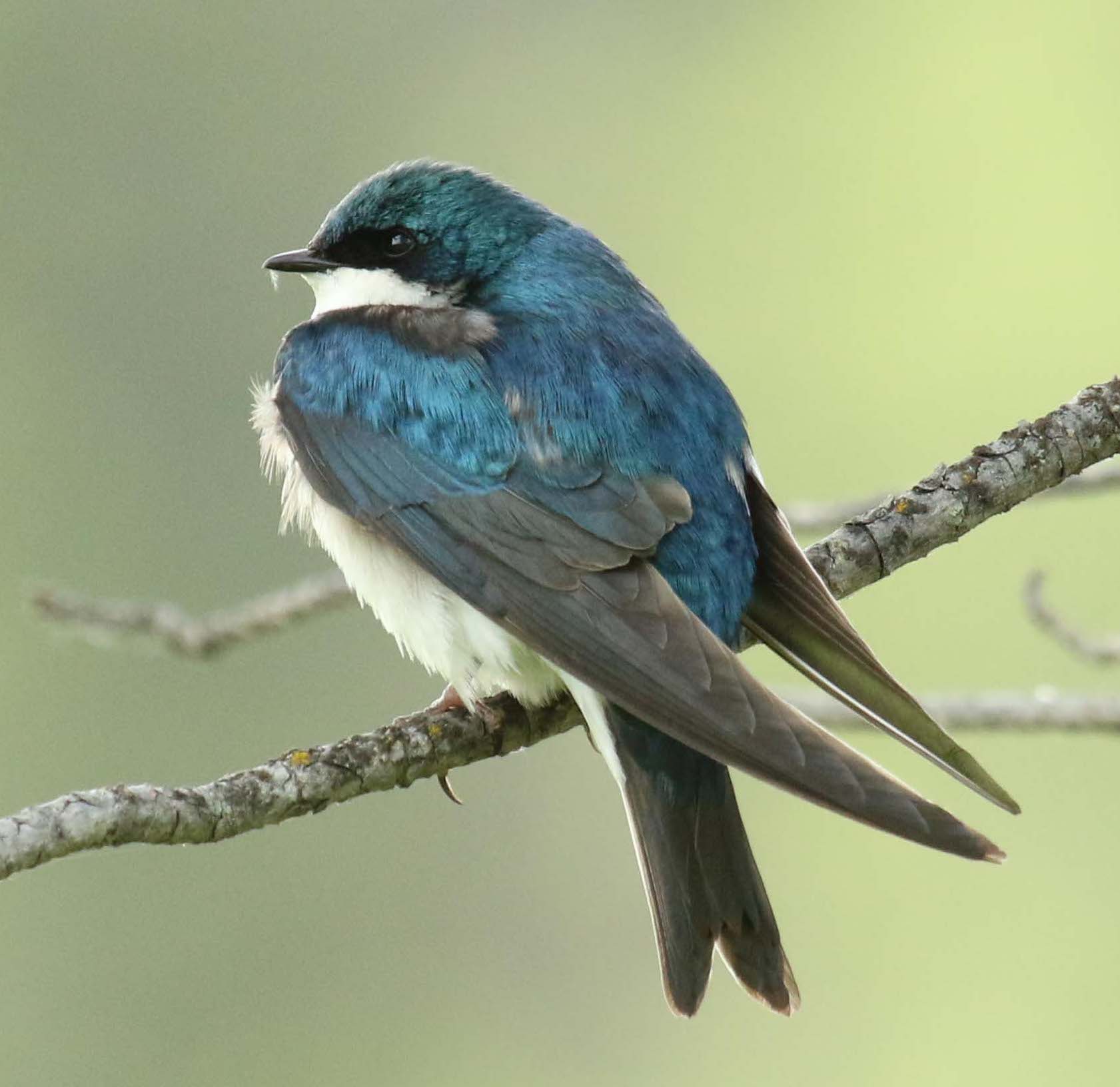 I have worked with Maren Vitousek tree swallows since 2015 on a population that has been continuously studied since 1985. 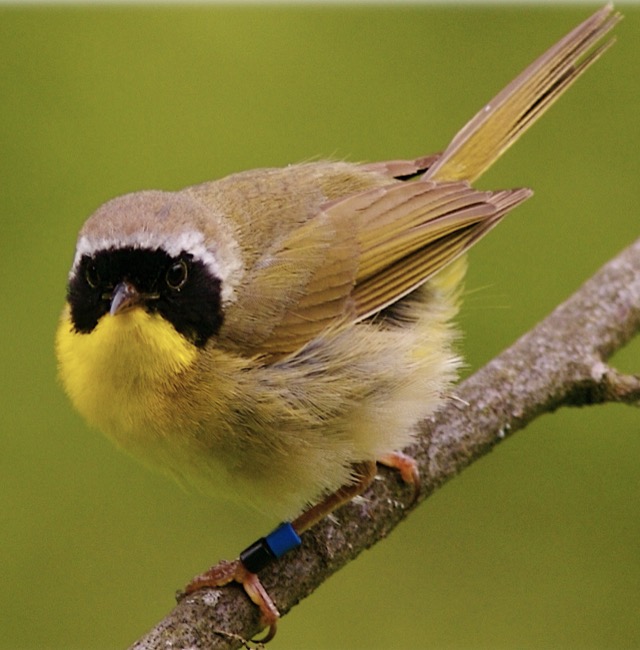 With Corey Freeman-Gallant I have maintained a banded population of common yellowthroats since 2005.

With Andrea Townsend I have worked on disease ecology in American crows since 2012.

One of the major challenges that animals face in natural populations is dealing effectively with unpredictable and rapidly changing environmental conditions. The ability to deal with these challenges is increasingly important to understand to understand because of global climate change. Much of my research on tree swallows since 2015 investigates the way that flexibility—or lack thereof—in suites of physiological and behavioral traits allows animals to persevere through challenging conditions.

Vertebrates often respond to unpredictable environments by rapidly elevating circulating glucocorticoid hormones that shunt resources towards survival. This system is highly flexible and responsive to environmental conditions. However, set against this backdrop of variation, a recent meta-analysis that I conducted using all vertebrate studies to date demonstrated that there are moderately consistent between-individual differences in glucocorticoids. In tree swallows, these natural differences predict survival and stress resilience. Experimental manipulations of hormones and of environmental stressors confirm both that natural variation in physiology also predicts resilience to standardized challenges and that coping ability has downstream fitness effects. While glucorticoids receive a lot of attention, many other candidate mechanisms and behaviors contribute to variation in resilience and my work also investigates epigenetics, metabolic regulation, microbiome and diet metabacoding, and social interaction networks. Individuals that successfully cope and breed in the face of natural or experimental challenges have an integrated suite of traits associated with resilience. 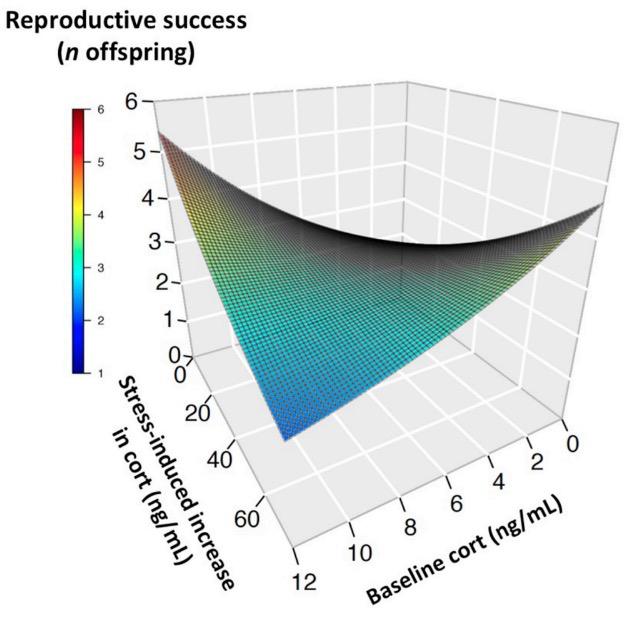 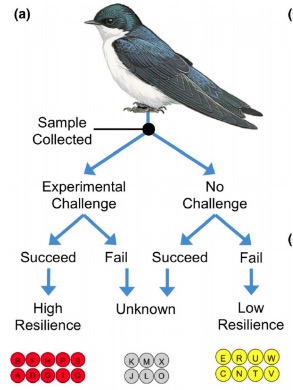 This system is unusually amenable to experimental manipulations that lest us impose realistic challenges and measure resilience. 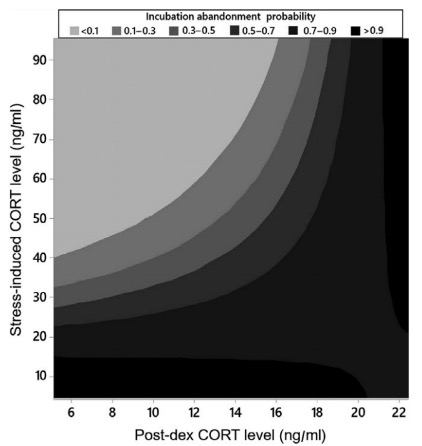 The strength of negative feedback (turning off the stress response) predicts resilience to challenges and reproductive success.

Sexually selected traits offer a window into the way that organisms allocate limited resources to competing demands. Often, these elaborate traits have been thought of as ‘wasteful’ because they don’t contribute directly to survival, but they are better understood as an integrated facet of whole organism phenotypes. My work on sexually selected signals has focused on moving from demonstrating an association between signal elaboration and mating success to placing signals in a framework of dynamic regulation resulting from the interplay of internal and external processes.

For example, in common yellowthroats, song performance and variation in yellow coloration are correlated with male reproductive success. These signals are in turn associated with underlying aspects of physiology and immunocompetence. However, the way that signals function in this system is much more complicated—and more interesting—than a simple case of directional selection based on mating preferences for honest signals. Both the physiological costs and the mating benefits of signals vary with the spatial distribution of habitat and with age. Signalers respond to these changes by flexibly adjusting signal production on the timescale of minutes. Moreover, integration of the entire suite of traits appears to be maintained—to some extent—by interactions with environmental challenges, such as infection risk. 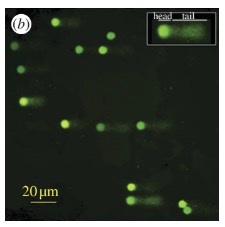 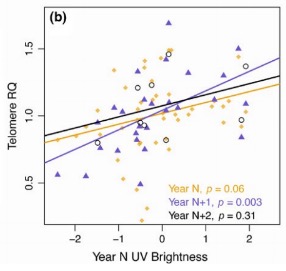 Changes in the rate of telomere erosion are associated with changes in ornamentation. 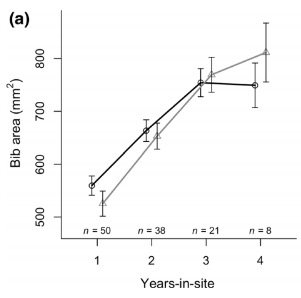 Ornaments increase as males age, but the trajectory of increase differs with blood parasite infection history.

In my work on tree swallows I have directly addressed the ways that physiology and the social environment are linked through plumage signals. While it has long been known that the social environment can influence physiology and that signals can influence the social environment, it is challenging to accurately measure the social environment experienced by free-living animals. I have established a methodology using a large-scale RFID sensor network that generates millions of time and location specific identifications from hundreds of individuals across an entire breeding season. Using a custom suite of scripts that I wrote for this project, I found that females with brighter white breast patches occupy more a more central position in the social interaction network. Targeted manipulations to different aspects of the phenotype (e.g., hormones or signal manipulations) have downstream effects that ripple through the entire suite of traits. Conceptualizing signals as part of a dynamic regulatory network is a powerful approach to understanding how signals respond to selection and how ‘honesty’ is maintained. 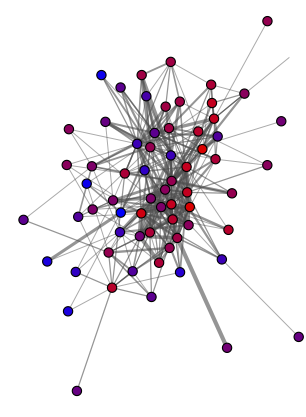 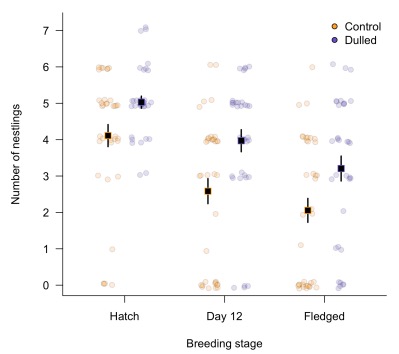 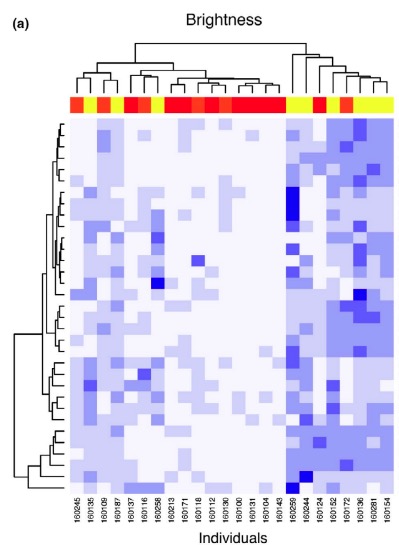 Another major challenge that wild animals regularly face is the risk of infection. In some cases, these infections also have important implications for humans because disease in wildlife populations can spillover into human infections. Since 2012, I have studied connections between infection by zoonotic West Nile Virus and Campylobacter jejuni and ecological immunology, mortality, and disease transmission in wild American crows. This research explores the role of crows as facilitators of pathogenic bacteria transmission across species and as vectors for the introduction of non-local bacterial strains across their migratory routes. We use a range of techniques including next generation sequencing of bacterial isolate genomes, phylogenetic reconstruction of bacterial lineages, satellite tracking of crow migration and habitat use, genetic analyses of crow population mixing using RADseq identification of SNPs, stable isotope analyses, and ecological immunological measures of individual crows.

Crows are particularly interesting because the live in close proximity to humans and form huge communal roosts in the winter across much of North America. We used satellite and GPS tracking backpacks to study space use in the winter in an effort to understand how crows might link different habitats and disease exposures through their daily movements. We found that space use is critical to understanding risk. Many crows carry WNV or Campylobacter, but only certain areas get high exposure to crow feces. 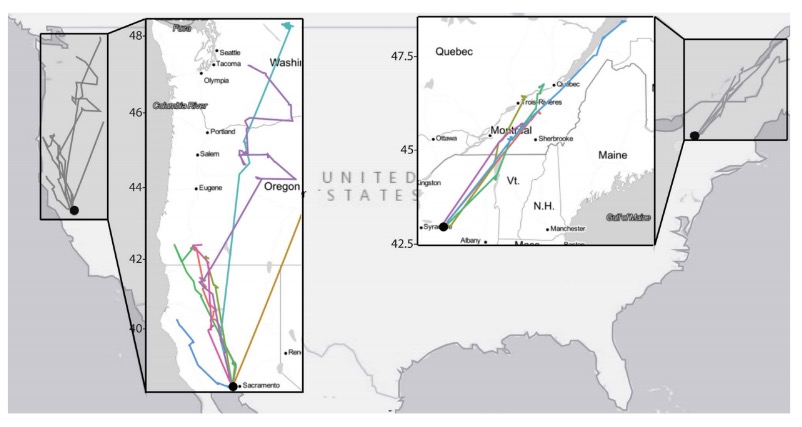 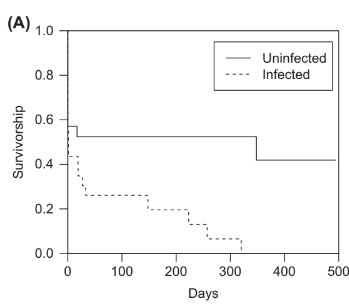 Despite the common claim that Campylobacter is an avian commensal with no negative effects, we found that infected adults had reduced survival. 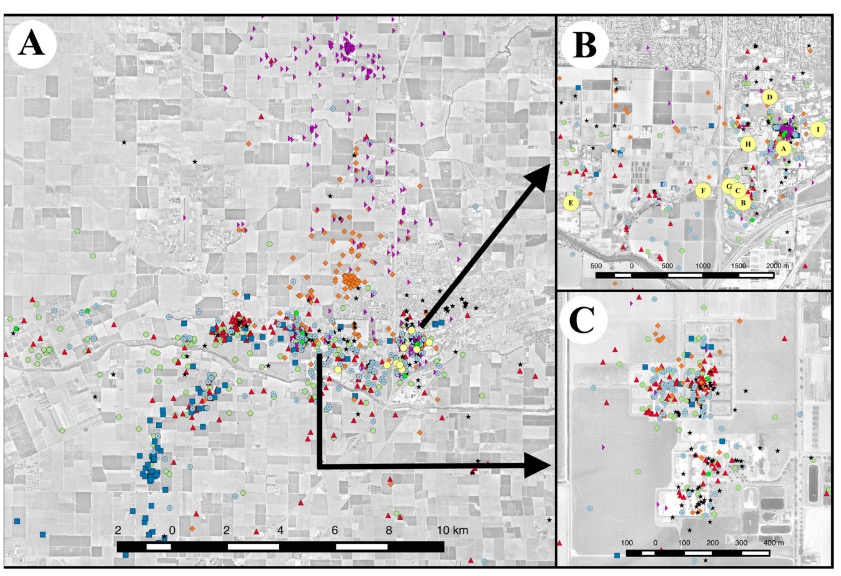 We conducted a detailed analysis of space use using GPS tracking during the winter roosting season to evaluate the potential for cross-species transmission of C. jejuni from crows.

Why do Some Individuals Succeed When Others Fail?

A common theme across all of my research projects is trying to understand why some individuals succeed when otheres fail. For challenges that animals commonly face—dealing with unexpected weather, finding a mate, coping with infection—there should be strong and consistent selection to find an optimal solution. Yet when we go out and measure performance in these tasks, there is nearly always considerable variation between populations, between individuals, and even between the same individual when measured multiple times. What processes create this variation and what are the consequences? I am increasingly interested in the role that phenotypic integration plays in generating this variation. Responding appropriately to challenging situations often demands a highly coordinated set of phenotypic traits that all work in concert to produce a favorable outcome. Dynamic feedback betwee the social environment, physiology, ecological conditions, and previous challenges may create conditions that promote resilience or susceptibility to subsequent challenges. I am actively pursuing these questions in the tree swallow and yellowthroat systems.

I have been really lucky to have the opportunity to work with a great group of collaborators and advisors on all of the projects listed above. Thanks to them and to the funding agencies that have made my research possible!